A Survey about Healthy Lunches

The theme for the school's annual Family Challenge
this week was
'Enterprising New Zealanders'.
Teams of families and friends had fun solving puzzles, answering questions
and facing challenges such as
'Making Connections', 'Balloon Race', 'Match the Inventors and their Inventions', 'Marketing', 'Who Wants to Be a Millionaire?', 'Who am I?' and 'Make a Decorative Item'.


Thank you to the organising team, the night was a lot of fun.
Do you have a suggestion for our theme for next year?
Posted by B4 at 8:45 PM 9 comments:

Email ThisBlogThis!Share to TwitterShare to FacebookShare to Pinterest
Labels: schoolevents

Our Storybird Collaboration with Canada

This term we have been working on collaborative writing with our buddies
in Mrs Watson's Grade 2/3 class in Canada.
We used the Storybird site and have worked in
pairs or threes to create our stories.
There were lots of things we had to think about to collaborate successfully.
We learned to re-read the story each time it came back, so that our next page
would fit in.
We had to choose pictures that went with the story, and our story had to make sense.
Our stories have been embedded on our wiki pages.
Please click on the links to read our stories.
We hope you enjoy them.

by Spike, Alex and Justin

by Tyla and Jordan

by Nikki and Brooklynn

by Jack and Dante

by Jonathon and Oceana

by Paige and Sahara

by Lily and Lily

by Lukah and Karin

by Dylan, Kayden and Fay

by Liam, Matthew and Niall

by Stevie, Teagan and Ana

by Nathan, Jordan and Kennedy

by Neil and Sophie

by Samantha and Jenny

by Holly and Quang
Thank you Mrs Watson's class.
We really enjoyed writing with our fabulous buddies and we love our stories!
What did YOU enjoy most about writing the Storybirds together?

In Writing we have been learning how to show conversations,
and we are also learning to use words other than 'said'.
We know that each time another character speaks, we start on a new line.
How do you think Ganda, Paige, Spike, Jack and Dylan did in their first drafts? 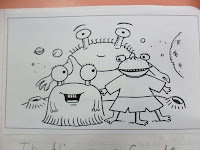 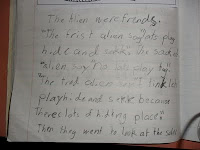 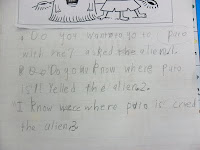 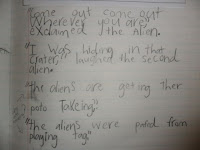 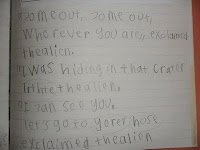 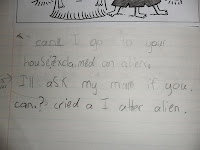 What do YOU think the aliens are saying to each other?
Do you know some more words to use instead of 'said'?
Posted by B4 at 8:53 AM 10 comments:

Email ThisBlogThis!Share to TwitterShare to FacebookShare to Pinterest
Labels: children'swriting

♫ ♪ ♩ ♩ ♫ ♬
June 11 is a milestone birthday for our friend and quad-blogging buddy, Mrs Yollis.
We love sharing birthdays with our friends,
so we got together
with Mr Salsich's class,
Mr Avery's class and
Mrs Morris and Miss Jordan and 2Km &2KJ
to put together some birthday wishes.
Mrs Yollis,
we wish you a very Happy Birthday.
♫ ♫ ♪ ♬ ♬
We hope you have a special day.
Happy Birthday Mrs. Yollis! from Mr. Avery on Vimeo.

We hope Mrs Yollis' friends (both adults and children)
from around the world
will add their birthday wishes to this Voicethread:

Postcards from the Planets

An update about the 'alien'.
If you remember, at the start of term we found some
space junk in our school yard.
We then started receiving messages from an alien
who had crash-landed on the moon.
We found out that he was very smart, could move fast, see well and could make things.
He asked about our planet and the planets in
our solar system.
Since then we have been receiving postcards from the planets!
It turns out, the alien has been planet-hopping through our solar system
to get back to his own galaxy.
Check out our postcards:
Postcards from the Planets on PhotoPeach
The alien's final message arrived from Pluto.
He told us that he could see the stars beyond Pluto and now he knew the way home.
He thanked us for our help in getting him through the solar system, and said goodbye.
Goodbye alien. We hope you get home safely!
Because the alien crash-landed on our moon, there are three planets that he did not visit.
Which planets were missed out?
Posted by B4 at 8:24 AM 7 comments:

Email ThisBlogThis!Share to TwitterShare to FacebookShare to Pinterest
Labels: science

We are learning about arrays and how they can help us to count groups of objects quickly
by skip-counting.
Arrays are set out in rows and columns.
Inspired by the photos we saw on Mrs Lynch's class in Australia, we went looking for arrays around our school.
Arrays are found everywhere!
Amazed with Arrays on PhotoPeach
When we write the number story for an array, the first number tell how many rows there are, the second number tells how many objects are in each row.
Have a look around your home.
Can you find some arrays?
Can you write the number story for the array you found?
Posted by B4 at 4:38 PM 3 comments:

Email ThisBlogThis!Share to TwitterShare to FacebookShare to Pinterest
Labels: maths

It's Time for Magnie to go Home

It's time for Magnie to go home to Burravoe.
He has had quite a long stay in New Zealand, first visiting the Super Scoopers in Dunedin, and then the Pirates of Rm 4 in Invercargill.

We made this book for Magnie's class:

We wonder how long it will take Magnie to get home?
Do you know how far he has to go?
Posted by B4 at 6:51 AM 2 comments:

A parcel arrived for us.
Magnie the visiting whale was really excited when he
saw that it was from his friends
at Burravoe School!
When we opened the parcel we got some lovely surprises. 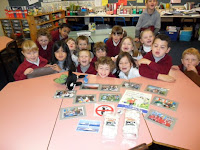 We found a book called 'Bobby an da Burland Pearls',
a keyring with a puffin on it,
a no-smoking sticker that says 'No puffin' '
and some very cool home-made postcards about
Burravoe School.
But the funniest thing we found was two bags of
PUFFIN POO!
Luckily we read the back of the bags and
found it was actually made of white chocolate, toasted ricies, marshmallows and coconut!
Mmmmmm, thank you Burravoe School, we really enjoyed the treats. 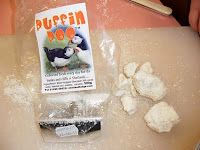 We had to use a lot of reading strategies when Mrs McKenzie read some of the book aloud to the class, as it is
written in dialect! 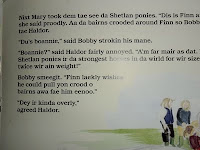 Do you know what type of horse is shown in the picture?
What do you know about puffins?
Which strategies did you need to use to read this page?
Posted by B4 at 6:45 PM 3 comments: